Oil pulling is an ancient Ayurvedic therapy in which medicated oil is swished in our mouth about 15 to 20 minutes and then spit it out to eliminate toxins from the mouth and the body. 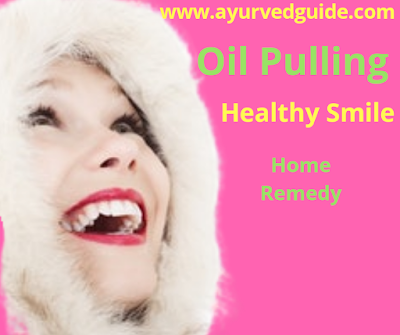 It is an ancient Ayurveda therapy as described by,

Guru vagbhata described the difference between Kawal and Gundush.

He has told the difference between Kawal and gandush is that

Kawal is that in which oil is swished in the mouth up and down to and fro.

It is kept still in the mouth.

So today’s oil pulling can be well compared with the Kawal described by Acharya vagbhata in ancient scripture, ashtanga sangraha.

According to Vag Bhatt

gandush or Kawal is of four types

It is useful to pacify vata dosh.
It is prepared with the liquid having a sweet, sour and salty taste
Or oil infused with Til tail or sesame oil, milk or मांस रस or chicken broth.

●it pacifies pitta dosha.
●It is prepared from the medicines having bitter astringent and sweet taste like neem, Jamun, Aam, mulethi, honey, milk, ganne karas or pure ghee.

It helps to relieve

●The pH of mouth thus preventing the growth of bacteria

●Any toxicity of mouth

It is prepared by the medicines having a salty and bitter taste.

It helps to relieve

●It repairs any cuts or abrasions in the mouth.

●It is prepared from the medications having an astringent, sweet and cool effect.

●It helps to repair any damage in the oral cavity.

So these were the four types of gandush or kawal described by  Guru vag Bhatt.

In Ayurveda 3000 years before, oil pulling or Kawal is well described in ashtanga sangraha by  Vag Bhatt.

According to him when this process is practised in the right way,  all the doshas of the body move towards the mouth and then extracted by this medicated oil.

Dear friends, it’s a very good concept of Ayurveda and in today’s scenario

I apply this method to my patients in routine practice and get very good results.

So it’s clear now that our ancient Ayurveda therapy is full of great knowledge, the demand of time is that we should grab the practical things as much as possible to get the benefit.

It is a practice that involves swishing liquids in our mouth

●to remove bacteria,
●Repair our gums and
●promote oral hygiene
●to prevent cavities formation by maintaining the pH level of the oral cavity.

When we put medicated oil, like sesame or coconut or Triphala water in our mouth and swish it,
●up and down,
●to and fro
●in between teeth

◆Oils like coconut and sesame  being rich in antioxidants vitamin E and many other good nutrients nourishes our oral cavity,

◆Leaving our teeth bright and white

◆Kills harmful bacteria in the mouth.

◆Loosen the debris and remove it

◆Keeping away the bad breath

◆inflammation if any, of gums, is decreased

◆It improves the lymphatic system

◆Imparts us a healthy smile

1.When you get up in the morning drink a glass of clean water

2. Then take One teaspoon of coconut or sesame oil

3.Swish in the oral cavity for 20 minutes

During this time, keep yourself busy in your daily household chores

Although it will be difficult starting to keep the oil for this much long time, you have to be patient to get the maximum results

4. Swish it All around,
In between teeth
to and fro
up and down

5,. When it becomes thin, milky and foamy by absorbing, toxins, any pus, or dead tissue etc,
then spit.

6. Be sure not to ingest it in any case, as it has become contaminated now.

7. Now rinse with warm water having a little salt in it that will clear the oral cavity from toxins and oiliness.

8. And now brush your teeth with your favourite toothpaste as per routine

Use this therapy two times a day in the morning

And in the evening before dinner.

You can spend time in

●reading newspaper
●walking with your dog
● checking your email
● or replying to your Facebook or WhatsApp messages.

Make it a daily routine at least once in the morning.

One line of caution is that don’t replace it with your daily brushing routine, use it as a supplement.

And you will get the desired results especially of the upper portion of the neck including oral cavity, migraine, mental peace good sleep and many more.

Many people claim to reduce weight by this therapy, but I don’t think so.

Being an Ayurveda Doctor, practising Ayurveda for last 20 years, I can say that it can provide us with a feeling of happiness, as most of the people are engaged in oral problems in one way or the other.

But by applying this therapy,

●when our mouth will be fresh,
●our gums will be healthy,
●there will be odour-free breathing,

there will be a feeling of happiness from within, and we will be more concerned about our health, thereby,

●can be able to stick to a weight loss plan or
●inculcating some other healthy habits easily,
thus improving our lifestyle.

There are no harmful side effects have been associated by using this home remedy.

For any query and mail me and

DrSeema Guptahttps://www.ayurvedguide.com
I am an Ayurvedic Doctor, serving humanity through Ayurveda an Ancient System of Medicine from the last 21 years, by advising Ayurveda principles and healing the ailments. I follow the principle that prevention is always better than cure.

ABOUT US
This Site is About Ayurveda Guide. Here you can learn all about yoga diet plans and Ayurveda medicine benefits Ayurvedic therapy and much more.
Contact us: ayurvedguide8@gmail.com
FOLLOW US
© 2020 | Ayurved Guide | All rights Reserved.